A follow up to my post about Jeff Bezos requiring his executive team to write full narrative memos (instead of PowerPoint presentations) when presenting proposals or initiatives. Bezos said this in explaining the approach:

“Full sentences are harder to write,” he says. “They have verbs. The paragraphs have topic sentences. There is no way to write a six-page, narratively structured memo and not have clear thinking.”

As I wrote in my essay “Behind the Book,” the hard part about writing is not which words to use; rather, it’s in what order paragraphs should appear. The order of paragraphs holds the logic of the points being argued. And so most of “editing” involves re-ordering paragraphs and fleshing out transitions to and from paragraphs, rather than tweaking sentences.

You could argue the order of the bullet point slides in a PowerPoint deck forces a presenter to similarly consider logic and flow, but since you can orally compensate for rough spots, the standard for crisp thinking while building a PowerPoint deck is lower. Hence, Bezos insists on full narrative written prose–or at least that’s my guess as to why.

One of my favorite Joan Didion quotes is “I don’t know what I think until I try to write it down.” Writing is thinking. A lot of busy people say they wish they had more time to “think” — to be proactively thoughtful rather than reactive. But “thought time” is a hard thing to actually schedule, let alone measure. Writing, on the other hand, is something you can schedule to do and then evaluate and measure the output (e.g. 700 words a day or a blog post a week). When someone tells me they don’t do much writing anymore, I sometimes wonder, When do you think deep-ish thoughts? And how do you ever know how coherent your thoughts actually are?

Jeff Bezos likes to read. That’s a dog-bites-man revelation if ever there was one, considering that Bezos is the cerebral founder and chief executive of a $100 billion empire built on books. More revealing is that the Amazon CEO’s fondness for the written word drives one of his primary, and peculiar, tools for managing his company: Meetings of his “S-team” of senior executives begin with participants quietly absorbing the written word. Specifically, before any discussion begins, members of the team — including Bezos — consume six-page printed memos in total silence for as long as 30 minutes. (Yes, the e-ink purveyor prefers paper. Ironic, no?) They scribble notes in the margins while the authors of the memos wait for Bezos and his minions to finish reading.

Amazon executives call these documents “narratives,” and even Bezos realizes that for the uninitiated — and fans of the PowerPoint presentation — the process is a bit odd. “For new employees, it’s a strange initial experience,” he tells Fortune. “They’re just not accustomed to sitting silently in a room and doing study hall with a bunch of executives.” Bezos says the act of communal reading guarantees the group’s undivided attention. Writing a memo is an even more important skill to master. “Full sentences are harder to write,” he says. “They have verbs. The paragraphs have topic sentences. There is no way to write a six-page, narratively structured memo and not have clear thinking.”

From Fortune’s recent profile of Bezos. 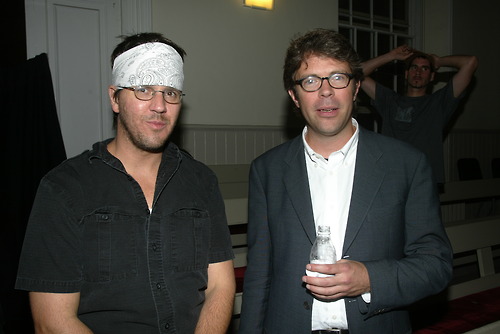 I’m reading D.T. Max’s biography of David Foster Wallace. Early in his writing career, Wallace was sent a galley of Jonathan Franzen’s first novel. He loved it, but he wrote back to Franzen’s editor:

I’m having a lot of trouble with my own stuff right now, and this book, a freaking first novel, seems so much more sophisticated than anything I could do plot-wise, so precocious in its marriage of theme and character and verisimilitude and phantasm, so simultaneously wild and controlled, that I found myself hugging criticisms of it to myself in unabashed self-defense (a subspecies of envy).

The trickiness of being inspired by others: the person needs to be better/faster/stronger than us in some way but not so much so that a) the chance of one day having that superior quality yourself seems utterly unrealistic or b) the person’s superior quality engenders an unproductive amount of envy and related depression.

In my essay Lessons Learned and Reflections on Publishing a Bestselling Business Book, I said I didn’t read many books outside the career field because I didn’t want to get depressed reading the prose of some world class novelist. It reminded me of a note I got from Cal Newport when he was writing his book: “I took a break from my manuscript writing and read a novel by a Nobel prize winner in literature. Remind me never to do that again.”

By the way, I love DFW’s use of “sub-species” as a phrase. In my article on lessons learned from publishing a book, I write about the process of getting feedback on the manuscript:

Here’s my big lesson on how to get helpful help. Remember when Reid asked his friends whether the manuscript was great? The value judgment great / not great is helpful to know whether you are finished. We thought we were close to finished, but in fact we were not. That was a helpful part of the feedback process.

But once we realized we had more work to do, hearing whether someone thought it was great or not great – whether they liked it or didn’t like it – was not useful. What’s helpful is how you actually make the text better regardless of whether they like the current version or not. As Tim Harford suggested to me, if you know you have work to do on the manuscript, just ask someone for one or two tips to make it better. Focus their mind exclusively on practical, actionable specific changes you can make to improve it.

The plastic scoop lying in a can of weight-gain powder “like an abandoned beach toy.”

It’s quoted as a positive example in The Art of Fielding of good prose in this otherwise negative review of the book.

Those who effectively deploy metaphor and simile tend to be effective communicators overall.