While traveling to Africa a few weeks ago, I read Dark Star Safari: Overland from Cairo to Cape Town by Paul Theroux. Theroux is probably America’s most famous travel writer yet I had not read any of his books until now. Dark Star Safari was excellent and I recommend it for anyone taking a trip to the giant continent. It’s the travelogue of his overland journey — car, bus, animal — from the northern tip of Africa to the bottom.

He does it on the cheap: he reports from wretched-smelling train cars, rat infested hotel rooms, and dusty, poor villages where clean water is nowhere to be found. I read portions of the book in comfortable hotels or cars in Tanzania, often whizzing by the abject poverty. Theroux doesn’t make you feel great about that, but maybe that’s a good thing.

Theroux lived in Malawi back in the day and he doesn’t mince words when he returns and finds the poverty just as bad, the aid programs just as ineffective. Foreign aid diehards should be prepared for tough medicine from Theroux who at one point says that the only people who can fix Africa’s problems are Africans themselves.

The writing is lovely. His descriptions vivid. Below are my Kindle highlights. (And here is my post from 2009 about Theroux road trip in America and my own road trip impressions.)

Some countries are perfect for tourists. Italy is. So are Mexico and Spain. Turkey, too. Egypt, of course. Pretty big. Not too dirty. Nice food. Courteous people. Sunshine. Lots of masterpieces. Ruins all over the place. Names that ring a bell. Long, vague history. The guide says “papyrus” or “hieroglyphic” or “Tutankhamen” or “one of the Ptolemys,” and you say “Yup.”

One of the problems I had with travel in general was the ease and speed with which a person could be transported from the familiar to the strange, the moon shot whereby the New York office worker, say, is insinuated overnight into the middle of Africa to gape at gorillas. That was just a way of feeling foreign. The other way, going slowly, crossing national frontiers, scuttling past razor wire with my bag and my passport, was the best way of being reminded that there was a relationship between Here and There, and that a travel narrative was the story of There and Back.

Now a complex infrastructure was devoted to what had become ineradicable miseries: famine, displacement, poverty, illiteracy, AIDS, the ravages of war. Name an African problem and an agency or a charity existed to deal with it. But that did not mean a solution was produced. Charities and aid programs seemed to turn African problems into permanent conditions that were bigger and messier.

The greatest part of my satisfaction was animal pleasure: the remoteness of the site, the grandeur of the surrounding mesalike mountains and rock cliffs, the sunlight and scrub, the pale camels in the distance, the big sky, the utter emptiness and silence, for round the decay of these colossal wrecks the lone and level sands stretched far away.

The whites, teachers, diplomats, and agents of virtue I met at dinner parties had pretty much the same things on their minds as their counterparts had in the 1960s. They discussed relief projects and scholarships and agricultural schemes, refugee camps, emergency food programs, technical assistance. They were newcomers. They did not realize that for forty years people had been saying the same things, and the result after four decades was a lower standard of living, a higher rate of illiteracy, overpopulation, and much more disease. Foreigners working for development agencies did not stay long, so they never discovered the full extent of their failure. Africans saw them come and go, which is why Africans were so fatalistic. Maybe no answer, as my friend said with a rueful smile.

Urban life is nasty all over the world, but it is nastiest in Africa—better a year in Tabora than a day in Nairobi. None of the African cities I had so far seen, from Cairo southward, seemed fit for human habitation, though there was never a shortage of foreigners to sing the praises of these snake pits—how you could use cell phones, send faxes, log onto the Internet, buy pizzas, and call home—naming the very things I wanted to avoid.

That was my Malawi epiphany. Only Africans were capable of making a difference in Africa. Everyone else, donors and volunteers and bankers, however idealistic, were simply agents of subversion.

No objects I had seen in any African museum (Nairobi, Kampala, Dar es Salaam, and Harare) could compare with the African objects in the museums in Berlin, Paris, or London. Of course, much of that stuff had been looted or snatched from browbeaten chiefs

After he graduated from college a few years ago, it’s been fun seeing him break into the Valley and make a name for himself. As part of the founding team at Product Hunt, he’s been rallying product makers of all sorts into one of the most active online communities in tech.

They just launched Product Hunt Live, a chat feature for authors and makers to connect with readers. I’m participating tomorrow — Wednesday Aug 19th at 11 AM PT. Join me there to ask me anything for an hour!

Graves in Sarajevo, with everyone’s death year around 1995.

In his book Balkan Ghosts, a travel log and mini-history of the Balkan countries, Robert Kaplan writes: “The more obscure and unfathomable the hatred, and the smaller the national groups involved, the longer and more complex the story seemed to grow.” It captured perfectly my reaction after reading the book and learning about the histories of Serbia, Croatia, Bulgaria, Bosnia, Albania, Turkey, and various other neighbors. So much fighting over territorial, ethnic, or religious differences that appear to be so inconsequential relative to the bloodshed.

Much of the fighting has to do with perceived historical grievances. Kaplan writes:

Macedonia defines the principal illness of the Balkans: conflicting dreams of lost imperial glory. Each nation demands that its borders revert to where they were at the exact time when its own empire had reached its zenith of ancient medieval expansion.

I read the book because I was visiting Montenegro, Bosnia, and Serbia. I recently got back from the trip. Seeing the places in person, as usual, made me engage with history that I probably ought to have known but hadn’t prioritized knowing till now. Travel makes you do that. It also makes you keep up with a place in the news after you leave. 80% of The Economist used to be uninteresting to me; now, when I flip through and see one of the random articles about, say, Indonesia, I’ll read it, because I’ve been there.

Sarajevo was haunting. It’s a small and pretty city, especially the old town. And quite cheap. But to be in Sarajevo is mainly to see grave yards all around and to visit museums dedicated to a genocide that happened only 20 years ago. Normally, when you think of the horrors of history, you think of grainy black and white photos. The slaughter of Bosnian Muslims (by Orthodox Christian Serbs) happened in the era of color video and color photos. It was so recent that there are people alive right now in Sarajevo who are missing all the men in their extended family.

The Srebrenica massacre museum really emphasized Western negligence during the ordeal. The cowardice/incompetence of the U.N. peacekeepers was a surprisingly recurrent theme. After the U.N. declared Srebrenica a “safe city,” thousands of Muslim men gathered there, thinking they were safe. In fact, they made themselves a convenient target for the Serbian army who overpowered the hapless peacekeep 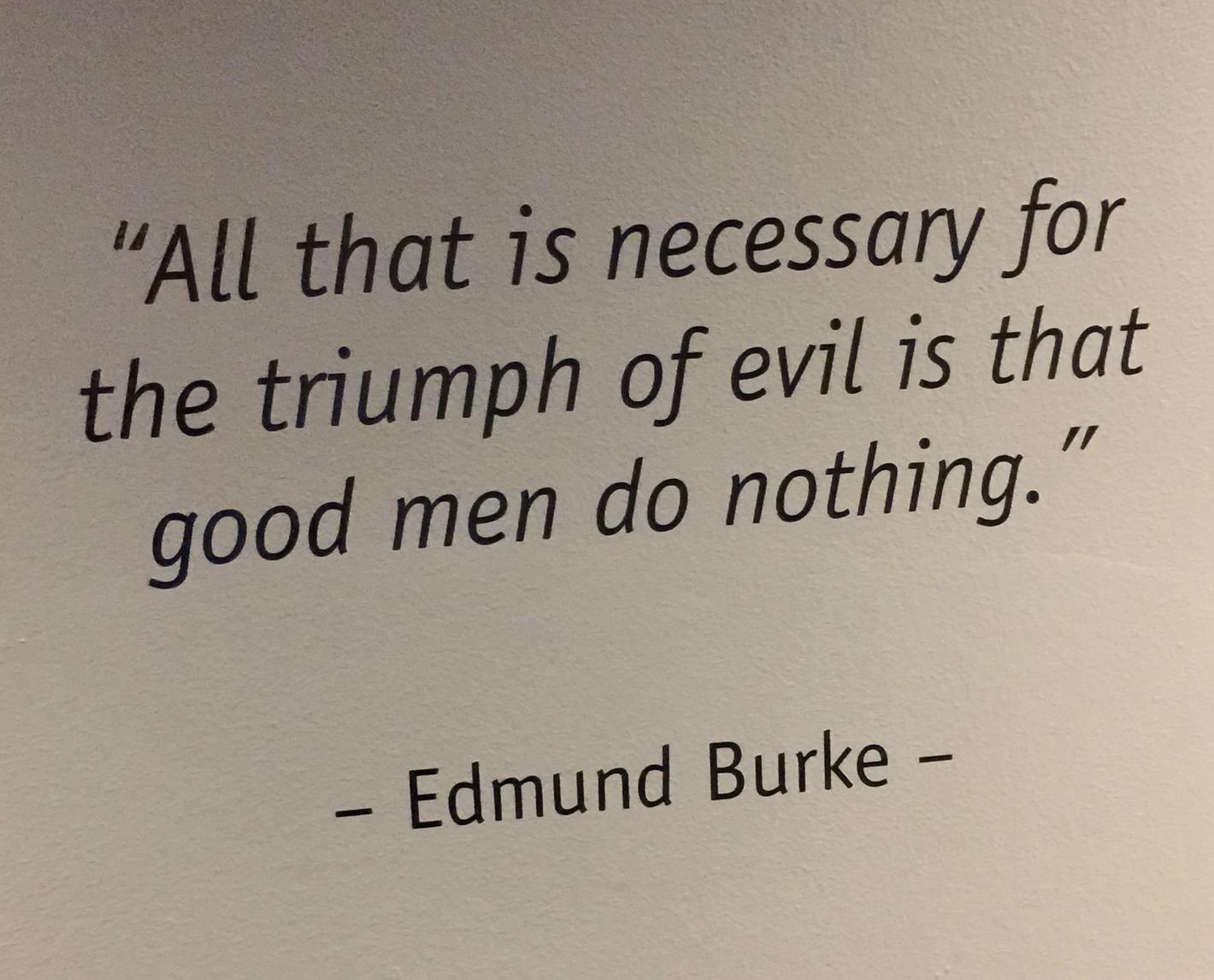 ers and executed 8,000 men and boys in 48 hours. The photo embedded to the right hangs on the wall as you exit the museum. You can’t help but reflect on the costs and benefits of humanitarian interventions.

After Sarajevo, I went to Belgrade. The Belgrade tour guide referred to the 90’s as a “terrible, sad time” where people on all sides made mistakes. He expressed remorse for the 1,000 Serbian civilians killed during the NATO air strikes. No mention of Muslims.

Neither Belgrade nor Sarajevo maintain blockbuster tourist attractions. Sarajevo is prettier; Belgrade maintains a Soviet aesthetic. The Bosnians and Serbians I met were all hospitable and intelligent. In both places I think you visit for a history trip: to learn about Tito and communism, to learn about the Balkan wars, to try to keep up with who hates who for which ethnic or religious reasons, to try to figure out the difference between Catholicism and Orthodoxy.

Here are Tyler Cowen’s impressions of Belgrade. We were there together at a conference. I, too, am very glad I made it to Serbia. And I hope there can be lasting peace in the region.

Full highlights of the Kaplan book below the fold. It’s a good book to read before a visit.

END_OF_DOCUMENT_TOKEN_TO_BE_REPLACED

Poem of the Day by Billy Collins

Litany by Billy Collins. Oh, the power of metaphor…

You are the bread and the knife,
the crystal goblet and the wine.
You are the dew on the morning grass
and the burning wheel of the sun.
You are the white apron of the baker,
and the marsh birds suddenly in flight.

It is possible that you are the fish under the bridge,
maybe even the pigeon on the general’s head,
but you are not even close
to being the field of cornflowers at dusk.

And a quick look in the mirror will show
that you are neither the boots in the corner
nor the boat asleep in its boathouse.

It might interest you to know,
speaking of the plentiful imagery of the world,
that I am the sound of rain on the roof.

I also happen to be the shooting star,
the evening paper blowing down an alley
and the basket of chestnuts on the kitchen table.